Adhesion promoters can be reactive or nonreactive. It will depend on whether they contain a functional group that can react with the substrates they can adhere to or not.

Non reactive compatibilizers/coupling agents draw their functionality mainly from their polarity which is introduced by a comonomer. They then represent an intermediate polarity between the 2 components of a mixture or between adhering substrates and the adhesion is assured by Van der Waals forces.

When mixing polymers with other components, be it fillers or even other polymers these two or more components will not necessarily like each other. In most of the cases there will be a repelling force and there will be very poor or even no adhesion. This will occur while mixing or even in many cases also when trying to adhere such components. An analogy of the real world will be mixing of oil and water in your salad sauce. Without mixing the components will separate. An example in the polymer world will be PA and PE

When adhesion promoters are used to increase the compatibility of two immiscible polymers, they are called COMPATIBILIZERS.

When adhesion promoters are used to increase the adhesion between a polymeric system and a filler, they are called COUPLING AGENTS.

Chemically these are the same materials in both cases.

The purpose of adhesion promoters

The purpose of adhesion promoters is to act at the interface to increase the adhesion between two substrates through the reduction of the interfacial tension.

When the adhesion promoter is used to increase adhesion between two incompatible polymers it is also called a Compatibilizer.

When the adhesion promoter is used to increase adhesion between a polymer and a filler it is called a Coupling agent.

The general principle of compatibilization is to reduce interfacial energy between two polymers in order to increase adhesion and also help dispersion. Generally, the addition of compatibilizers also allows finer dispersion, more regular and stable morphologies.

The addition of compatibilizer generally increases the mechanical performance and surface aspect.

We can distinguish 3 categories of compatibilizers: 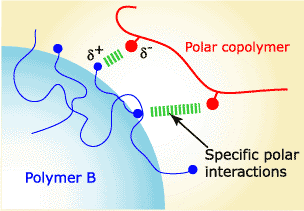 The principle of compatibilization by block or grafted copolymers is shown in figure 1. The compatibilizer acting in fact like a “surfactant” and will preferably migrate at the interface to reduce surface tension. Red blocks are compatible with polymer A (matrix) and Blue blocks are compatible with polymer B (dispersed phase). The consequence will be a better interfacial adhesion and better dispersion.
Figure1: compatibilization by Block Copolymers
Like a surfactant, block-copolymers have also the tendency to create micelles. The amount of compatibilizer is generally high (sometimes more than 5%).

Moreover, there are not too many block-copolymers commercially available for all polymers and they are generally expensive.

Figure 1 illustrates the mechanism of action.
The advantages are :

Malleated polymers
The reactive monomer is generally maleic anhydride. Malleated polymers are among the widest known family of functionalized polymers used as compatibilizer and adhesion promoters. They can be prepared directly by polymerization or by modification during compounding (this process is called reactive extrusion).

Anhydride groups can react with amine groups, epoxy groups and eventually alcohol groups. Figure 2 shows the example of reaction between a malleated polymer and -NH2 end groups of polyamides or Nylon 6,6 in order to compatibilize PA/polyolefin blends.

Malleated resins are also used to :

Epoxidized Polymers
Epoxidized polymers are also commercially available. Generally they are mainly modified by glycidyl methacrylate. They are very reactive with NH2, anhydride, acid, alcohol groups. They are recommended to compatibilize polyesters (PET, PBT) and olefinic polymers or elastomers according a mechanism shown in figure 3.

The concept is to reduce interfacial tension and increase the adhesion by creation of a specific polar interaction like hydrogen bonding or Van der Waals forces. The compatibilizer has to be compatible with one phase (generally nonpolar) and has to create specific interactions with the other phase. Figure 1 illustrates the mechanism of action